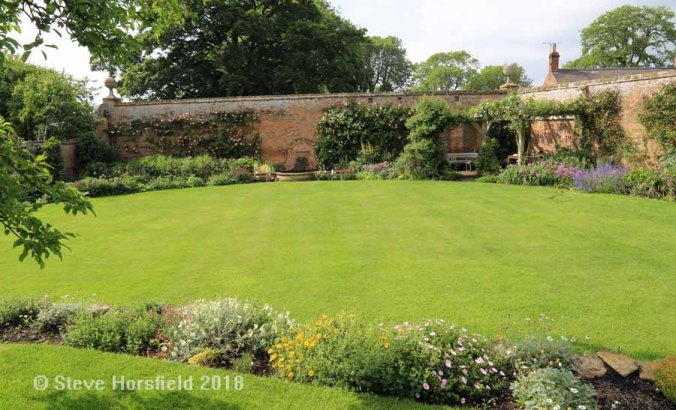 The weather this spring has meant everything is a bit late. Further more once things came out they seem to go over very quickly. This time last month the tulips were bursting out but now they have all gone. However, they looked fantastic for a couple of weeks. Likewise the alliums seem to be going over quickly and now at the end of May the roses are looking great. Interestingly the above average rain we have had has resulted in many of the flowing shrubs putting on great displays and the lawn has never looked greener.To the left of the pond the main rose is Rosa ‘Shot Silk’. It does not repeat well but is usually the first rose in the main part of the garden to flower. 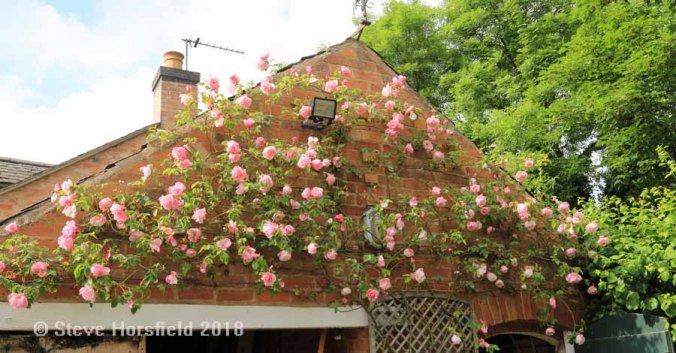 The rose that normally has the accolade of being first is Rosa ‘Madame Gregoire Staechlin’ which is also out at this moment. Again not a repeat flower but gorgeous never the less. 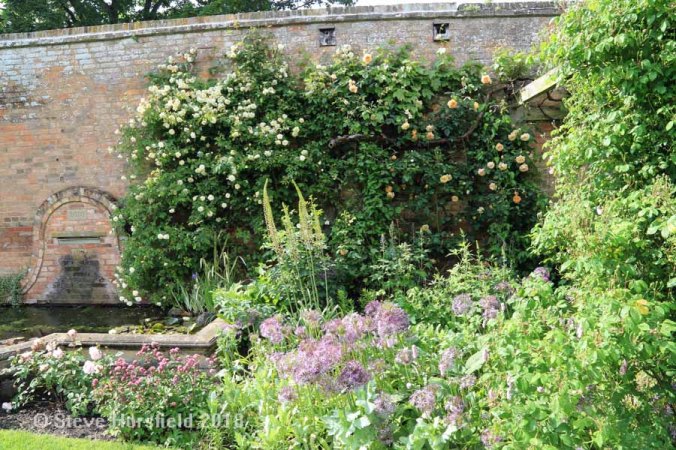 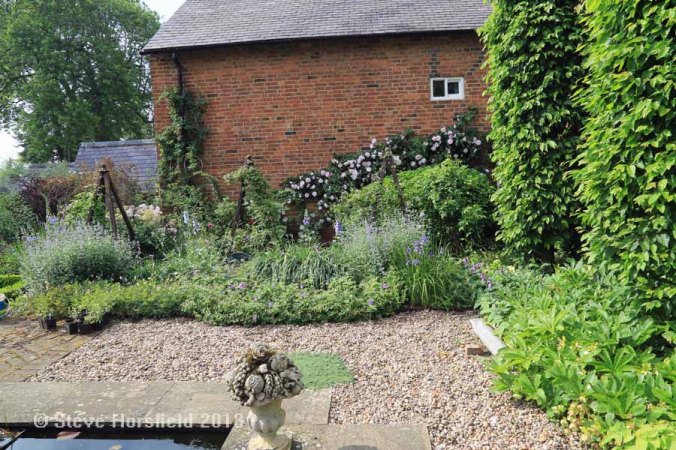 Else where next the the big pond is another beauty, Rosa ‘Fantan Latour’. 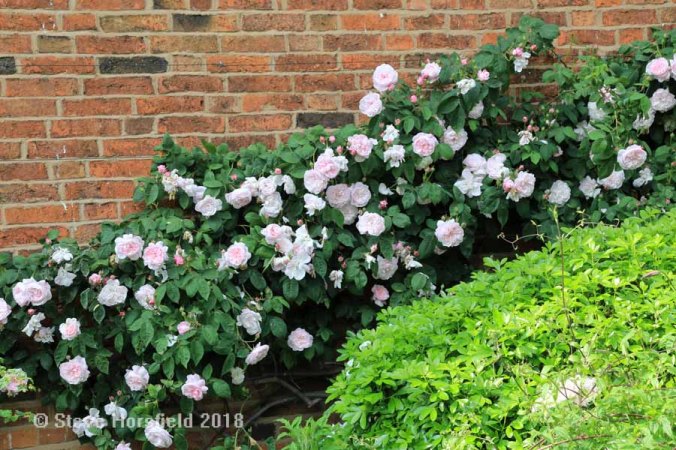 Not really a climber but no one told it! It had covered the whole of this wall although the flowers tended to be near the top so we cut it back very hard to just above the Choisya ternata and it has returned a great display. 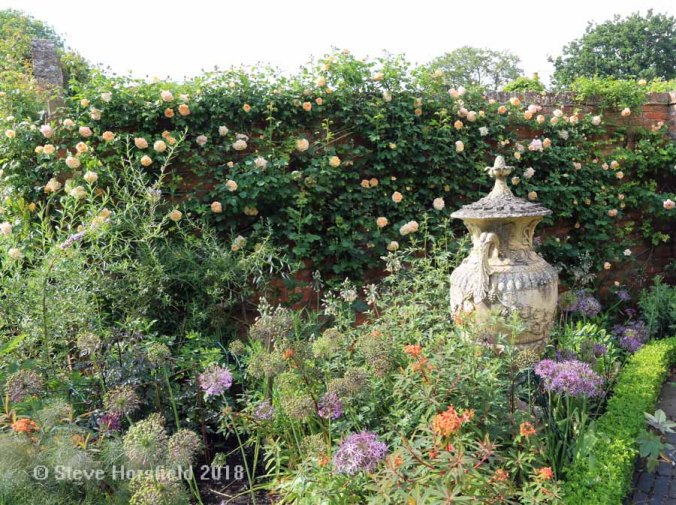 To the right of the main garden behind the urn is another favorite,  Rosa ‘Alchemist’. Well named as the flowers start of gold a slowly change to cream. 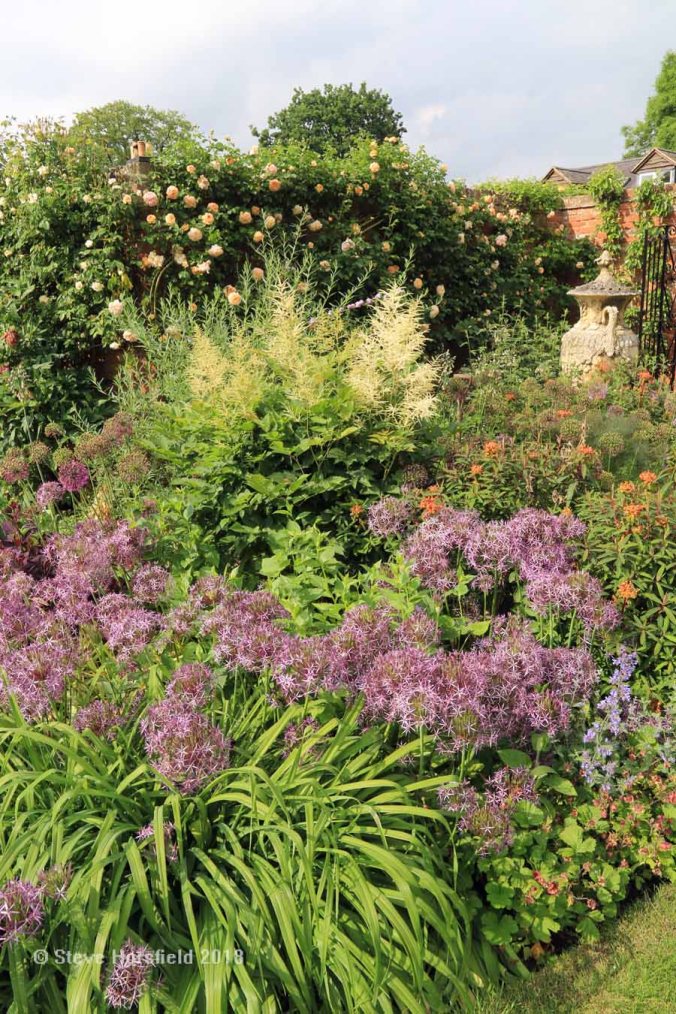 Another view towards Rosa ‘Alchemist’ with Aruncus dioicus is the middle ground. 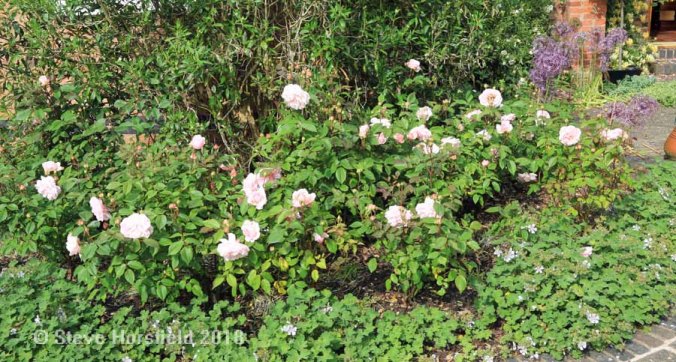 Not all the roses are climbers. Until last year we thought these were  Rosa ‘Irene Watts’ and as a result of my blog there was an extensive conversation which resulted in us finding out that they are in fact Rosa Pink Gruss an Aachen. Apparently many rose nurseries have been incorrectly supplying Rosa Pink Gruss an Aachen as Rosa ‘Irene Watts’. What ever the name they are great roses. 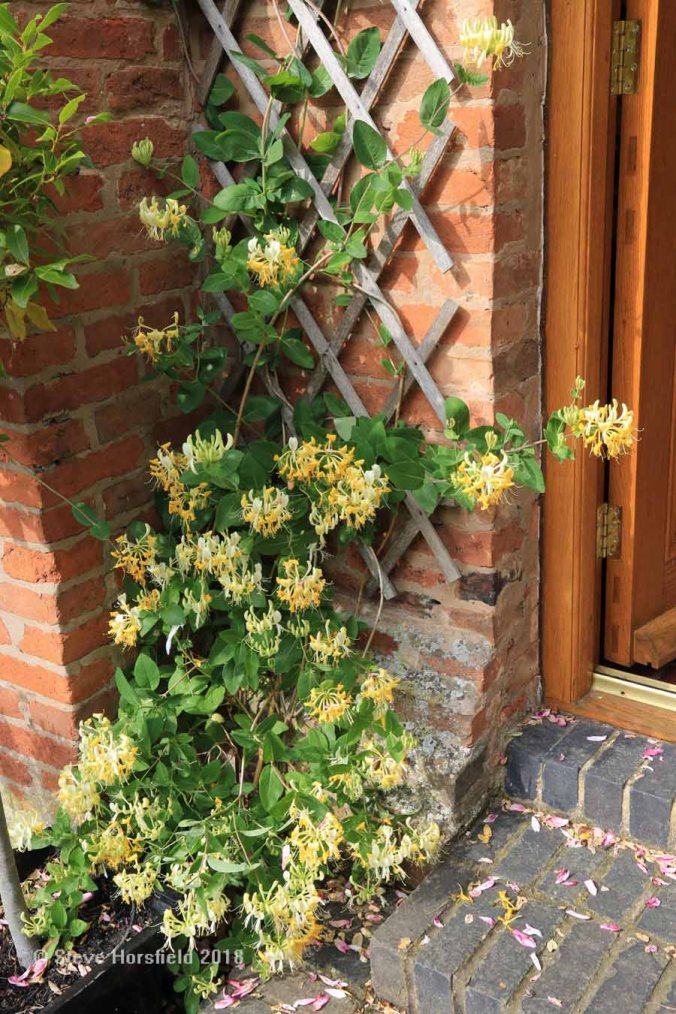 Near by by the back door we planted Lonicera periclymenum ‘Scentsation’ to give off a scent as we step out of the house. It is great to see it coming into its own. 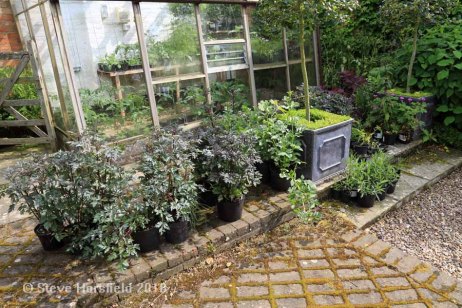 In two weeks the garden is open to the public. See advert in the side bar. There is still lots to do including getting many dahlias planted. 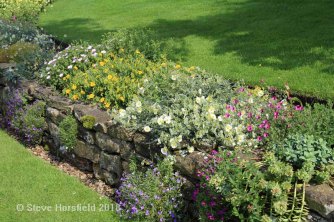 The wall across the lawn has been looking good and is just about ready. Maybe a final weed is required. 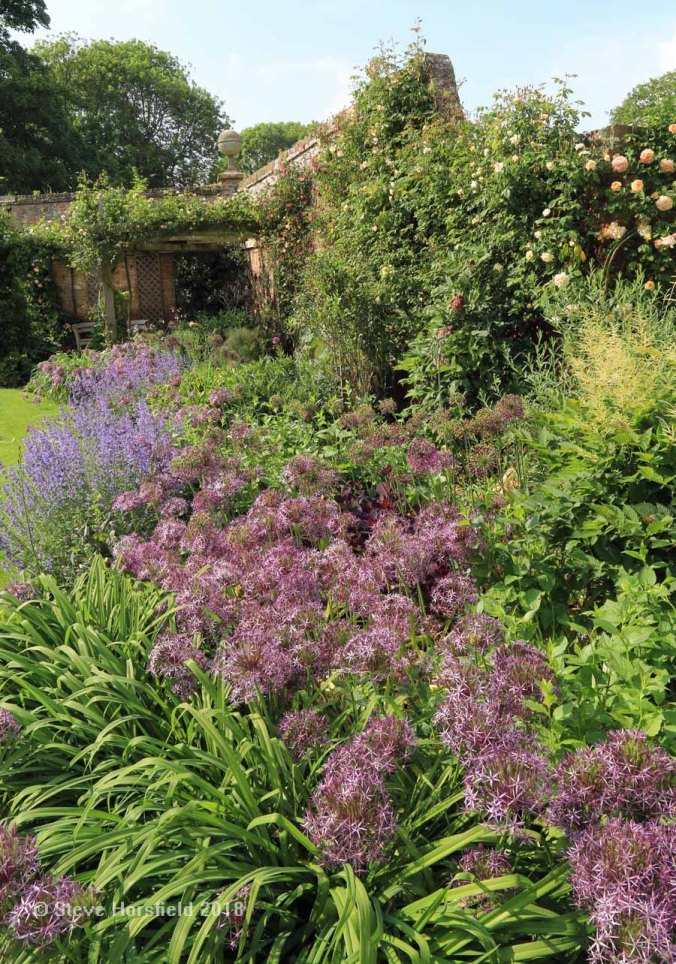 I am sure Allium Christophii are planning to take over this part of the garden! 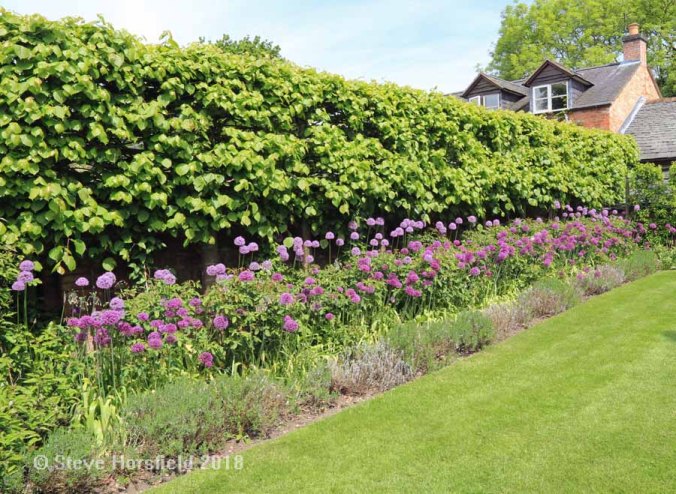 Two different globe Alliums always put on a good show under the pleached lime hedge. However, you can see the effect of the winter on the lavender where several plants have died! In addition to these losses we have also lost some salvias and a Euphorbia ‘Mellifera’. 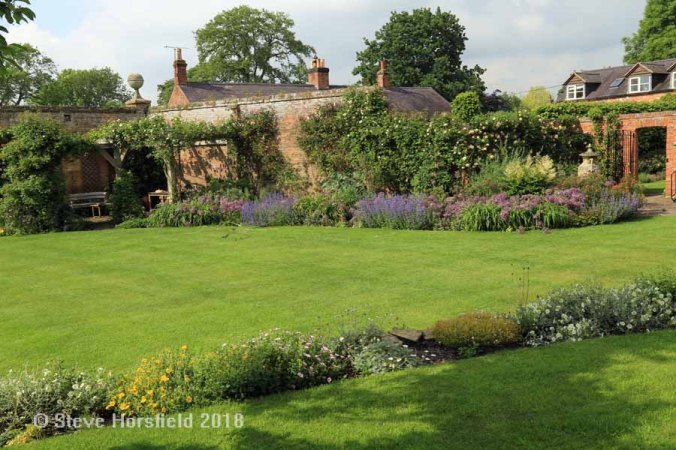 The border to the right with the  Allium Christophii  and some very large Nepeta ‘Six Hills Giant’. 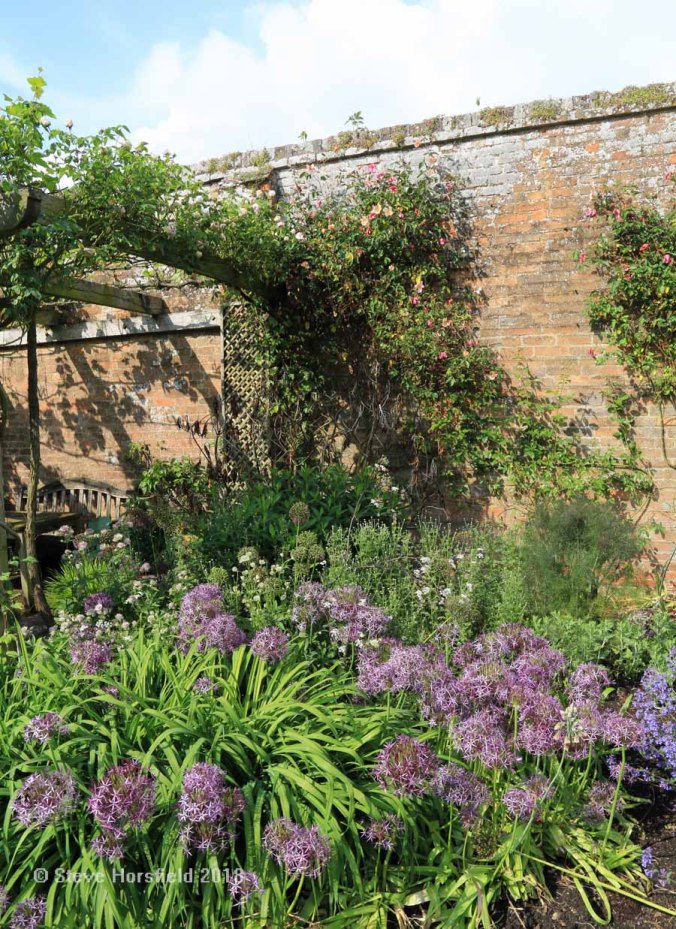 Looking closer you can see Rosa ‘Mutabilis’ starting to flower. 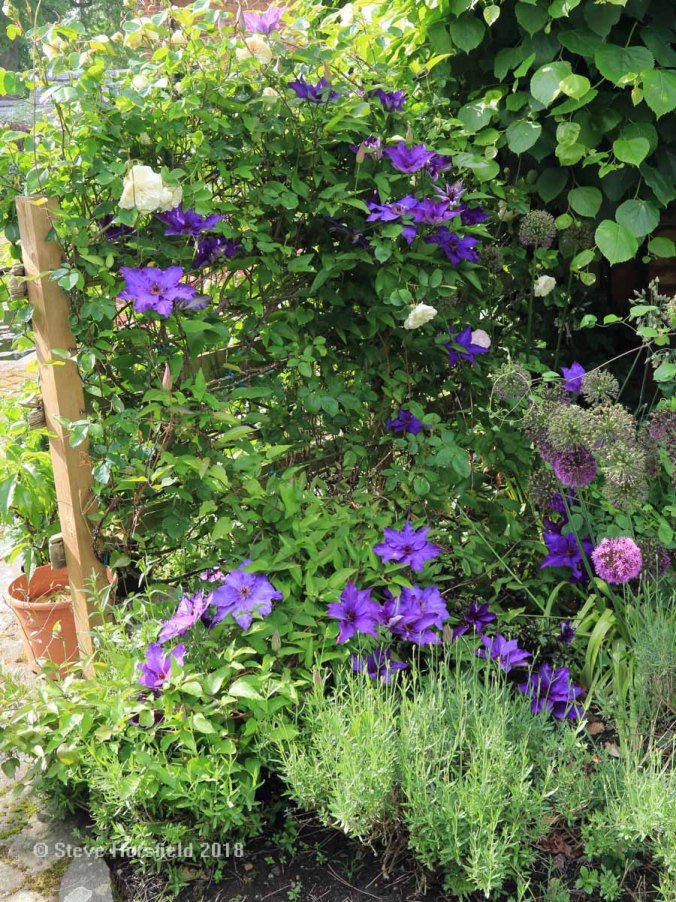 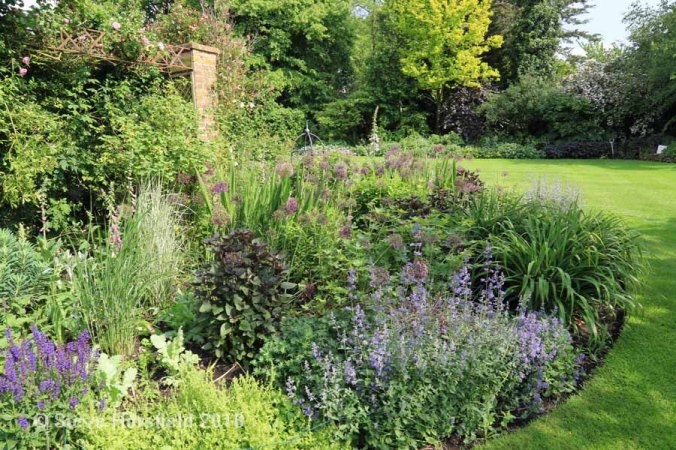 The border to the left of the main lawn was planted up with grasses etc last year and is beginning to develop although we need to do plenty of weeding here. 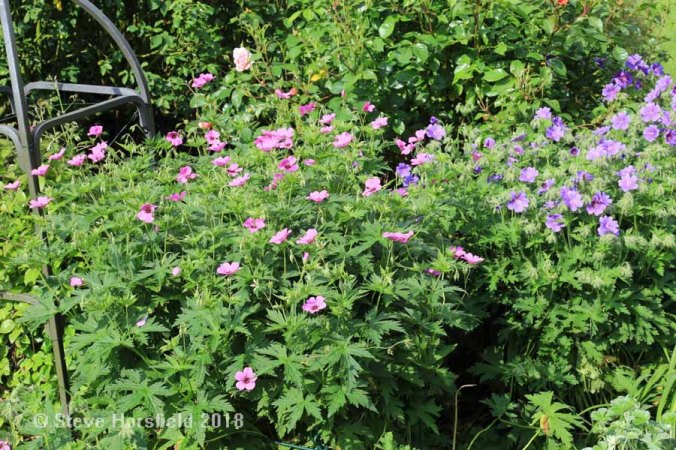 On the edge of this bed Geranium ‘Patricia’ and Geranium ‘Johnson’s Blue’ provide a great mix of colour.

Do have a look at Helen The Patient Gardener’s blog where you fill find links to other gardens at the end of April. Thank you to Helen for hosting this meme.

At last the last few days we have seen the sun with temperatures up to 28c which is very hot for England at the beginning of May. Yesterday I had noticed a very large toad in our main pond. The sides are steep and I was afraid that it could not get out so I moved it to our more natural pond which has sloping sides so that animals can get in and out easily. 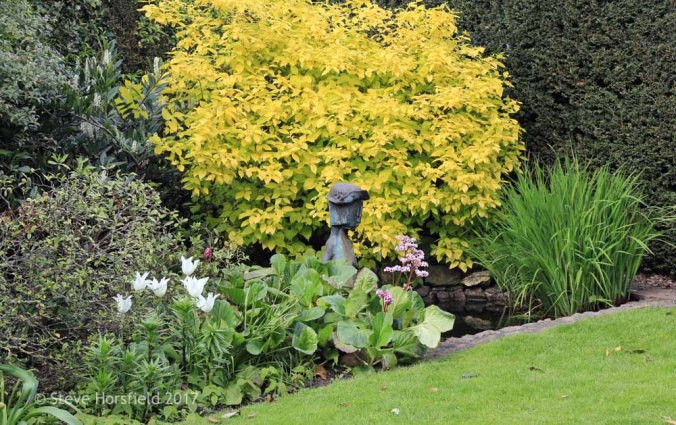 As I mentioned last week, this pond is currently full of tadpoles and it seemed an ideal home for the toad. 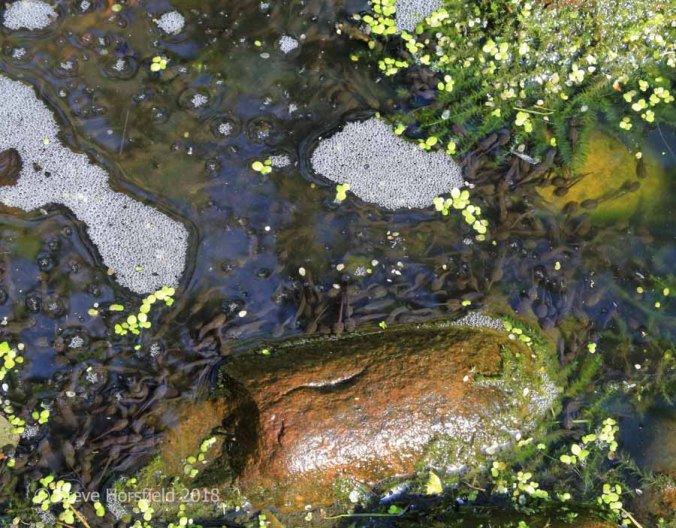 This morning we were showing some friend around the garden and they were fascinated with the number of tadpoles. I mentioned that as it was so warm the grass snakes might come out to feed on the tadpoles. As I said that I noticed the familiar tail of a grass snake. 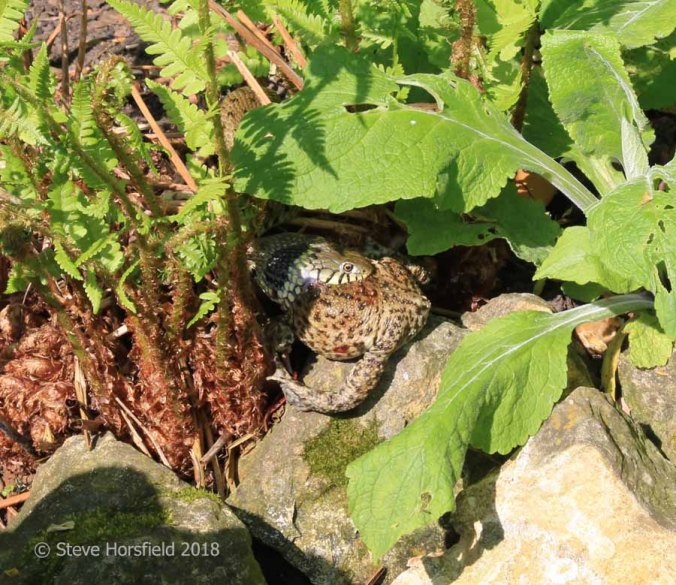 But to my surprise the large toad was being swallowed whole even though the size of the toad was about three times the circumference of the snake. After a few minutes the snake took fright and slid into the pond with the toad still in its mouth. 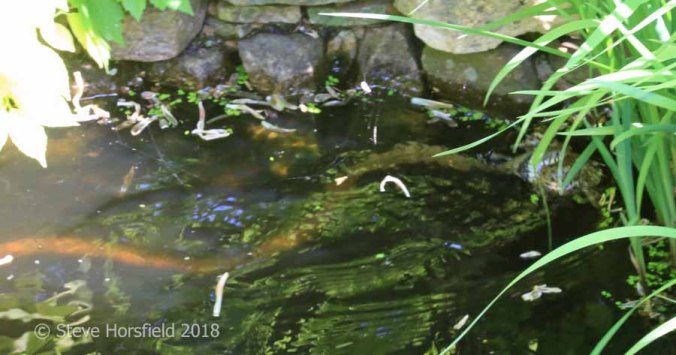 Not a good photo as things were moving quickly however you can see the snake’s mouth and the toad by the reeds on the right with the snake’s body curving to the left in the water.

Again the snake was frightened and took off into the undergrowth without the toad. Amazingly the toad was OK apart from a few scratches and a large amount of shock. He has been moved to another pond and seems to be recuperating OK.

The snake was about 80cm long and this was the first snake sighting this year. On another nature note the swallows have arrived back some five weeks later than they did last year! 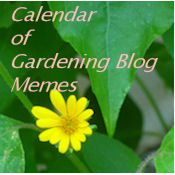 The life and loves of a plantsman

The latest in plants and gardening, from author, presenter and hortpreneur, Michael Perry.